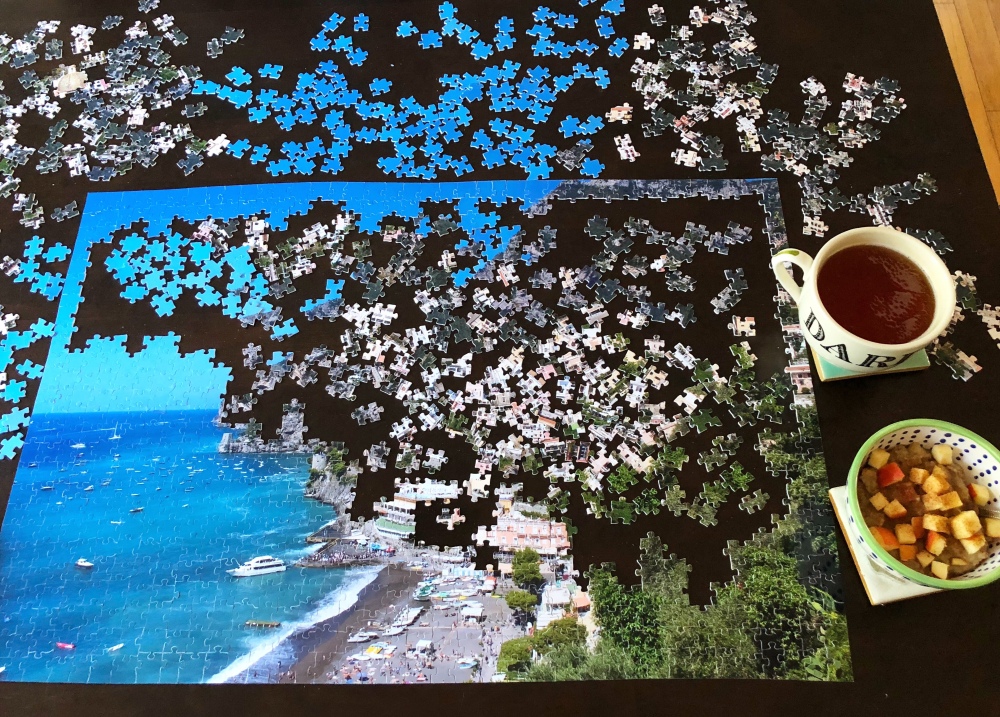 Rest of the apple diced for topping

– combine oats, almond milk, water, banana, spices, and apple to pot and stir constantly over medium high heat until it reaches the thickness you like.

-top with brown sugar, diced apples, and a sprinkle of cinnamon

Happy long weekend everyone! I’m starting mine off with apple cinnamon oatmeal, English breakfast, and attempting to work on my puzzle that I made from a picture I took in Positano. Remind me never to order a 1014 piece puzzle again! I need my kitchen table back! Tonight Josh and I are going to Seed Kitchen for date night. They have fabulous drinks, a great veggie and grain plate, and I’m the weird one that orders Asian pork buns without the pork… I love those steamed buns and hoisin! We have lots of leftovers from this week, so we’ll be having those for lunches and some dinners this weekend because the fridge is packed!

We’re going out for family dinner on Tuesday so we won’t need many meals this week. I planned some simple meals that sounded good even after a bowl of oatmeal.

Crispy Tofu Yakisoba- I found this recipe on instagram (rabbitsandwolves) and it looked amazing! You know I’m a sucker for any Asian noodle bowls.

Wonton Soup- My sister said she made a soup like this a while back when she was sick and it sounded so good I decided to try it. I’m going to add the vegetable gyozas from Trader Joe’s to broth with thin sliced mushrooms and green onions to make a mock wonton soup.

Cauliflower Gnocchi with Asparagus, mushrooms, and brussel sprouts- Everyone has been raving about the cauliflower gnocchi from Trader Joe’s so I want to try it out for this easy dinner. I’m making a quick sauce from broth, garlic, and red pepper flakes.

I made this few ingredient recipe for curried mushrooms and chickpeas last night from the McDougall recipe app, but it wasn’t fantastic so I won’t make a separate post for it. It consisted of onions, mushrooms, turmeric, coriander, cayenne, crushed tomatoes, and chickpeas.