Well due to my puppy eating underwear…AGAIN…it was a very late dinner tonight. After trying to get end of the year tests finished, having 2nd graders crafting parent gifts, throwing the leftover ice at each other at recess, then another trip to the vet, I started slicing to make this dinner even though all I wanted to do was order something and be done with it! Anyone else feel that way some nights? Whew.

Luckily it didn’t take long and was mostly slicing and placing then baking. I used canned San Marzano tomatoes and crushed them with my fingers to have a sweeter tomato sauce and with all of the herbs and spices it was quick and delicious. I couldn’t find Japanese eggplant so I used Italian so they didn’t fit as snug as they were supposed to but I presalted them to excrete some of the bitterness and they worked just fine. I topped this with vegan parmesan before baking for a little more flavor and texture and baked it for an hour or maybe a few minutes longer until the sauce was bubbling and vegetables were tender. This is a great light dinner. Recipe here

On the side I wanted a more substantial vegetable and found these teeny tiny potatoes (TJ’s) and they were too cute to pass up! I cut them in half, and mixed them with olive oil, dried rosemary, salt, pepper, and vegan parmesan and roasted them in the oven under the ratatouille until they were crispy on the outside. These were addicting and too easy to pop! 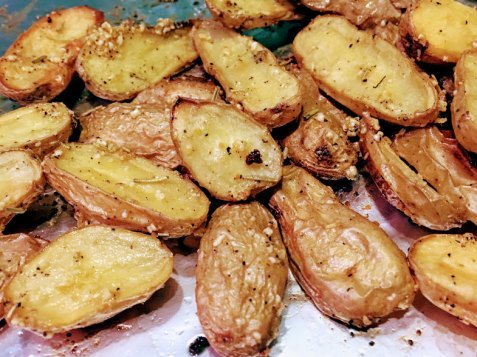