This past weekend we were in Las Vegas for my best friend’s wedding and I was really excited for more vegan options available for us to have. I did some research and asked others what restaurants were favorites, but unfortunately most of them ended up being off the main strip so we didn’t want to taxi or Uber there. There were definitely more vegan options than our area still, so that was a plus. I did know that the Wynn and Encore had a vegan menu for each of their restaurants because Steve Wynn is vegan so we learned it was easier just to take a (long) stroll from Caesar’s Palace to have a for sure meal option. If we ever go back to Vegas, I’d love to just stay there so that every restaurant will have an easy meal option.

When we arrived, we were starving and wanted to go somewhere in our hotel quickly before I went to the bride’s room to help, so we went to Beijing Noodle Co. It had big tanks of goldfish when you walk in, and we got vegetable spring rolls and I asked for them to make a tofu vegetable noodle bowl because I couldn’t find anything on the menu that I was looking for. It was really oily and the tofu just tasted like a sponge that absorbed water or oil, couldn’t tell. I of course ate it because I was so hangry at that point I was worried for other’s well-being if I didn’t, but it wasn’t as good as our local Chinese take out and for a lot bigger price.

For dinner, we walked around MGM for a bite to eat before going to the welcome party in a suite there. The more we walked around looking at places, the more confusing it got so we ended up going to a restaurant called Crush because I thought it looked romantic and pretty. They had a vegan menu but it had about 3 choices on it, so I asked if they could make a vegetable flatbread without cheese and they did. It was good! Not worth the price, but it did the job.

The next morning we woke up and decided to actually do more research before we spent that much money for food so we would have better luck and have more options, so we started walking to the Wynn. I found a vegan menu online for Terrance Pointe Cafe and I’m so glad I did because it was amazing! They had a vegan menu and the atmosphere was elegant and beautiful. We had a view of the pool and we got a vegan Belgian waffle with berries and spilt a side of breakfast potatoes and vegan sausage. I also got tea that was a cute little tea teepee from Tea Forté. It was the best breakfast we’ve had in so long! 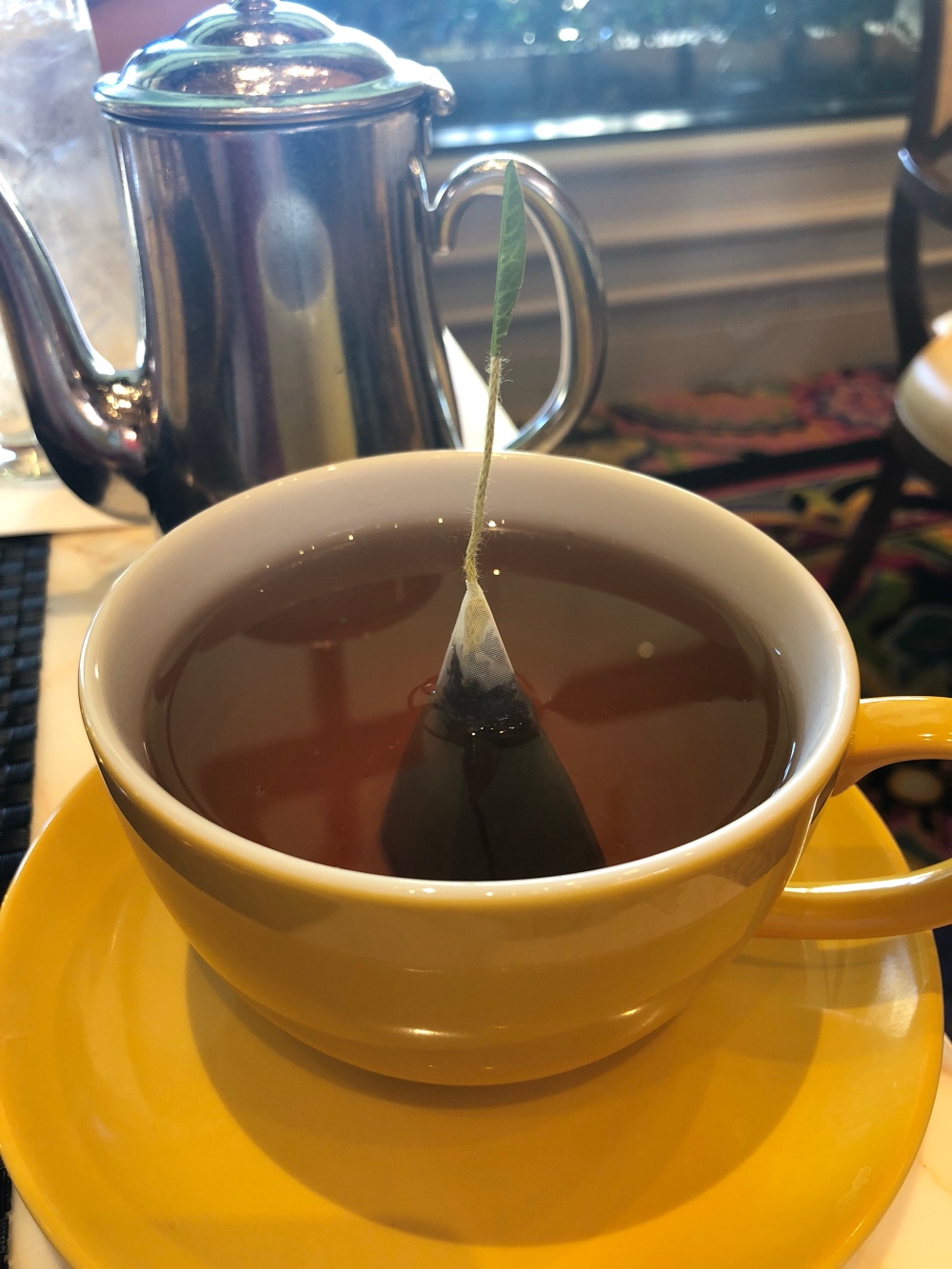 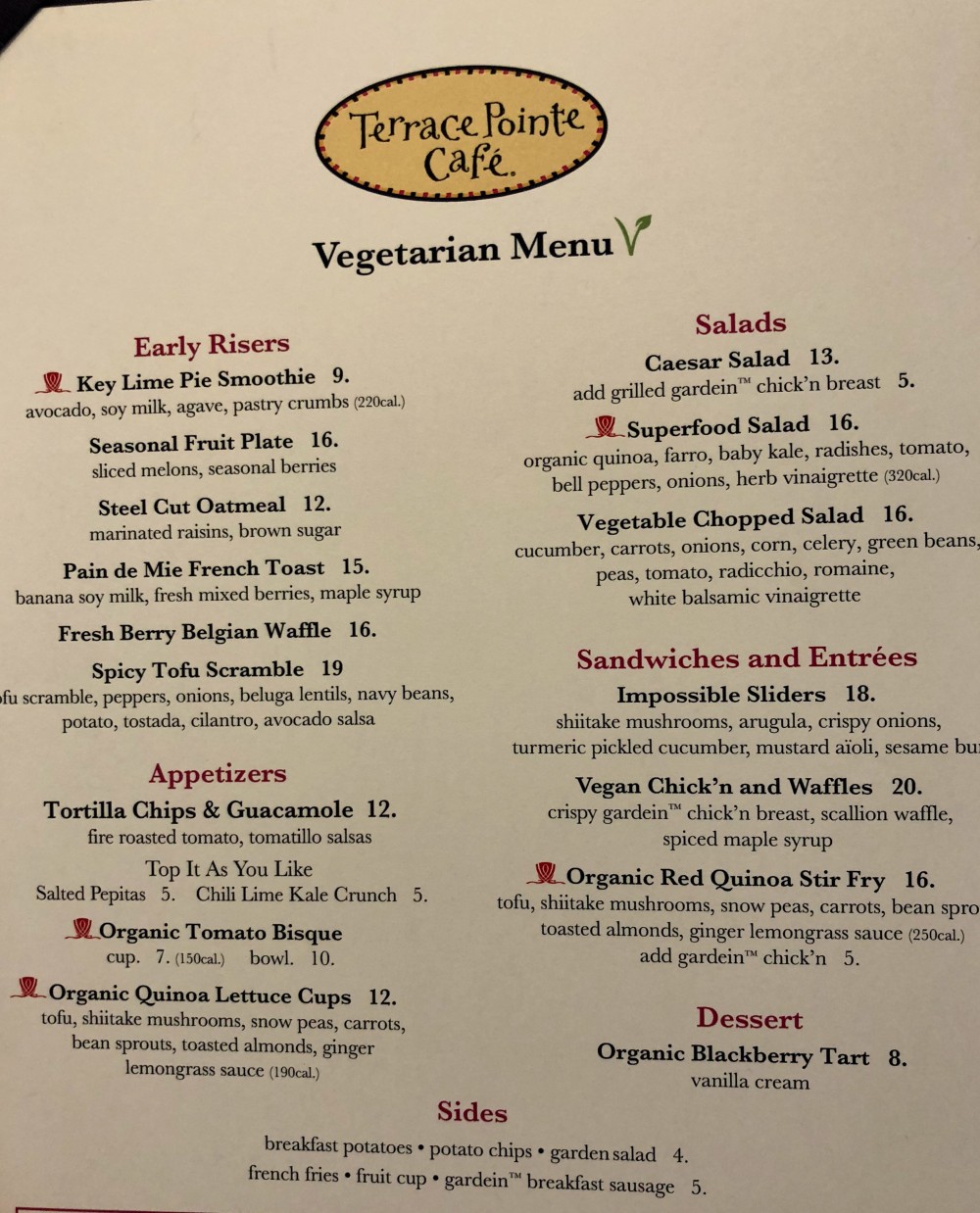 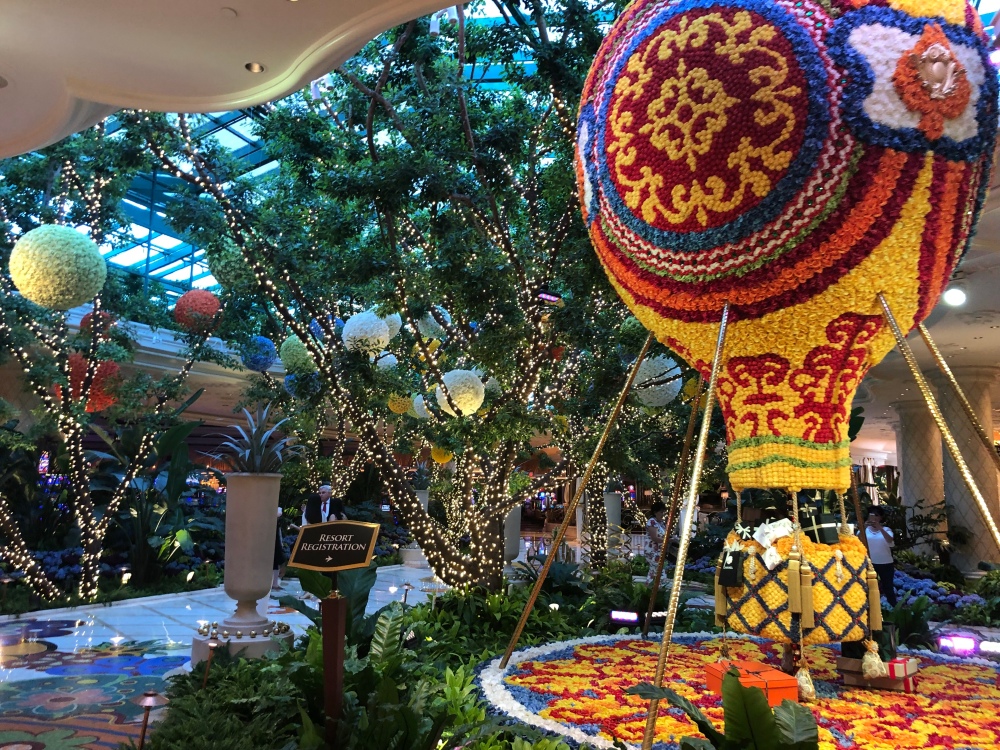 That day Josh picked up Chipolte from the Venetian food court on our walk back so he could do school work in the room and I went to go get ready for the wedding with the bride and had some peanut butter crackers for a snack, which was poor planning because it was a late dinner. After a beautiful wedding in Red Rock Canyon, we went to a private dinner at Carmine’s at Caesar’s and my sweet friend had already called ahead to ask them for two vegan meals.

They brought platter after platter of food, and by then everyone was chowing down. They brought out bread, and salad for us with oil and vinegar as dressing. Then they brought a platter of gluten free rotini in a chunky tomato sauce, and then a huge bowl of sautéed garlic broccoli. We ate SO much I felt like I needed to be rolled back to the room, so I’m glad there were so many speeches and it gave me some time to digest before walking back! I didn’t take picture because I didn’t want to be rude in front of a table of people.

The next morning we ended up walking back to the Wynn for breakfast to have a sure bet and we were eying the French toast the day before. There was a very drunk and disorderly guy who I think never went to bed the night before and came to breakfast ready to rage, so after almost knocking over a table and yelling fight songs, the staff talked to him and I’m pretty sure asked him to leave. He began pleading and said he would pay for everyone’s breakfast who was sitting around him who he disturbed. Score! We had vegan French toast with berries, breakfast potatoes and tea, thanks drunk guy! Delicious and maybe even better than the waffle. I’m glad I did carbo load since I ended up walking 26,400 steps that day!

I went to the pool for most of the afternoon so I skipped lunch and had some rice crackers in the room for snack that I brought and we got cleaned up and walked to the Bellagio and Cosmopolitan, then all the way back to the Encore for dinner at Wazuzu. We had a 30 minute wait so we threw some money in the slot machines and walked around, then we were seated and I was really excited about the great looking vegan menu options. We got the Gardein chick’n and cabbage pot stickers and shiitake roll with vegan eel sauce for appetizers and those were my favorites of the meal. For dinner I had the tofu drunken noodles, and I wasn’t super impressed. The amount of oil they had on them was too much for me and it wasn’t as flavorful as I was hoping for.

After dinner we walked back to the Wynn to meet friends for a drink before going back to pack and go to sleep before a busy day of travel. We went to the bar in the lobby and ordered Dakota’s favorite drink called The Dream. It has a candied hibiscus flower, St. Germaine liquor (my favorite), and champagne. For $22, it had to be good champagne! It was tasty, and after that we were ready for the walk back and part ways for the journey home.

It was an amazing time with beautiful friends and I’m so glad we got to witness such a meaningful and breathtaking wedding! The food of course wasn’t the focus, but it was really nice to try some new vegan selections while we were there and I wanted to tell you all about them in case you trek out that way. After a weekend in Vegas, I’m planning on napping for the next few days, so happy summer everyone!