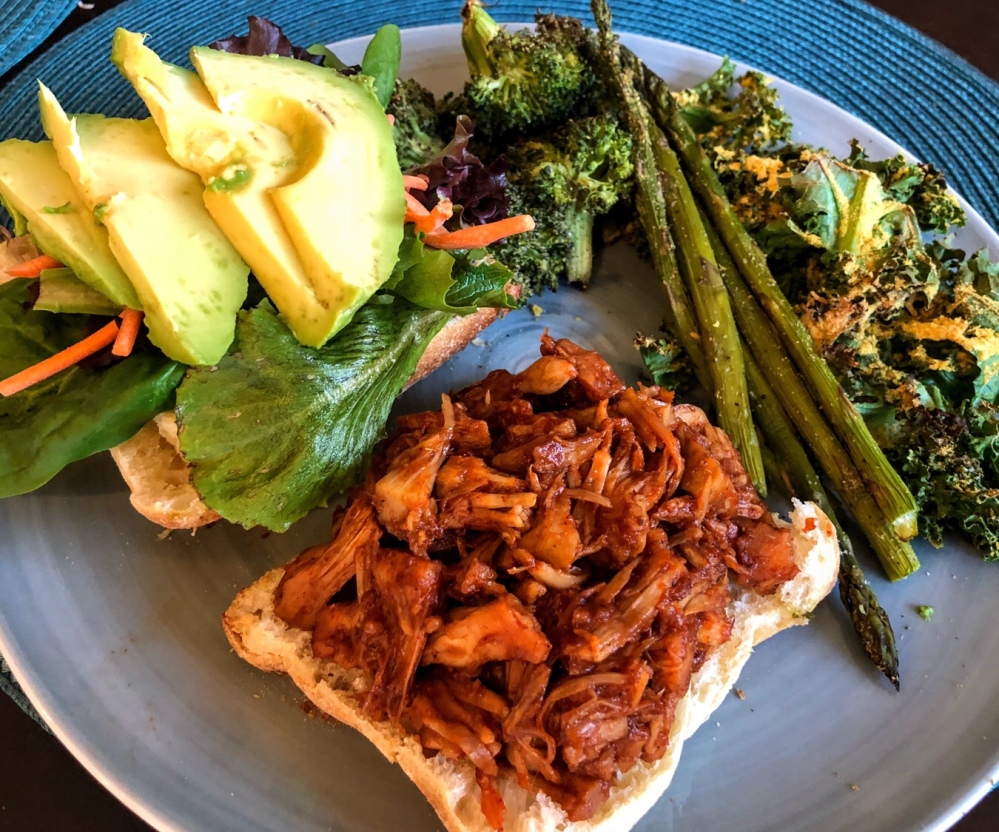 Intriguing! I’ve been wanting to try to make jackfruit for a while now, but it’s been intimidating me. I’ve never cooked with jackfruit, and I just learned what it was this year so where to even start? I’ve been steering clear of the mock meats since cutting out processed foods so it would be nice to have something to make BBQ sliders with that is plant based. I’ve seen the cans calling to me from the Trader Joe’s shelves and finally I answered. I looked up how to clean and cut jackfruit from a can and apparently there’s a hard core that you cut out and then you can use forks or your hands to shred the jackfruit until it’s all shreds. In this case it was already cut up in chunks so I just used my fingers to shred it and take the seeds out. You can make your own BBQ sauce to cook it in, but instead I used the easy route and used the Organic Brown Sugar BBQ sauce from TJ’s. It’s as easy as opening a can, shredding, heating with BBQ sauce in a skillet, and then serving it on a toasted bun with avocado or vegan coleslaw. Done in 10 minutes! They actually tasted like BBQ but not as chewy as meat. They have a softer texture but not mushy, but I wouldn’t overcook it. I think it’s a really great BBQ replacement and for 45 calories a cup!

1. Drain and rise jackfruit and then use your fingers to shred it and take out any seeds.

2. Add to a large skillet with the BBQ sauce and then cook over medium heat for 10 minutes until heated through.

3. Toast rolls and then top with the BBQ, and any toppings you want to add!

Simple as that! I roasted some asparagus, broccoli, and kale on the side with nutritional yeast, salt, and pepper.