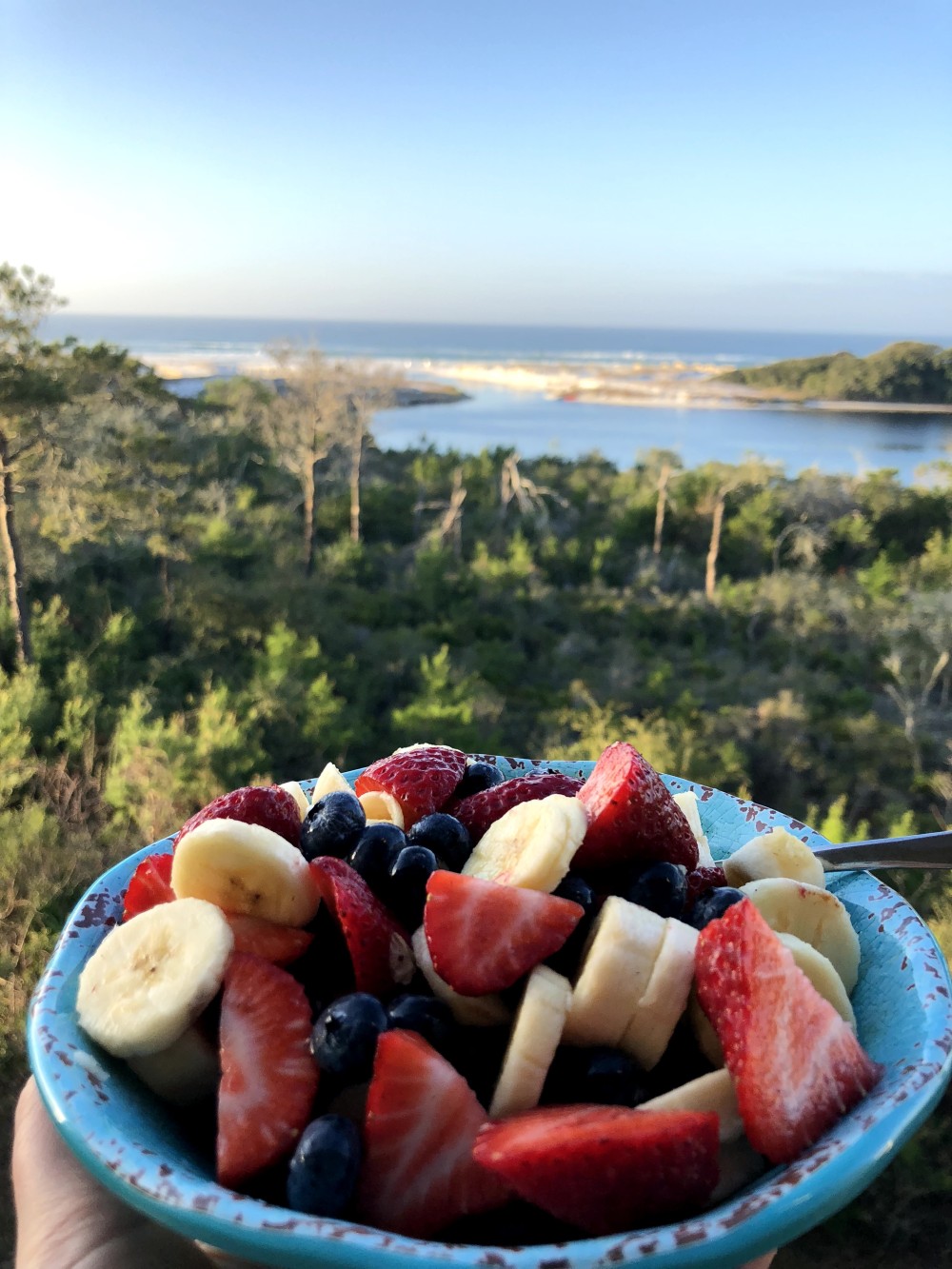 We had a relaxing week at the beach filled with reading, tanning/burning, taking Louis on walks, getting a couples massage, eating in and out, and watching sunset from the top deck. The beach is so relaxing to me and I love escaping life to come down here and just watch the ocean with my morning tea. No morning dolphin watch this time though because the waves were huge! We’re about to leave to come home, but I’m so thankful we have a place to come when we need a reset and need to relax because no where is more relaxing to me than the beach.

We went out to eat typically once a day for lunch or dinner, and while taking Louis on a walk through Seaside I found one vegan place (Raw and Juicy) and bought a local brewed kombucha that was tasty. There’s also a bakery less than a mile away that had gluten-free and vegan options so we went there for a muffin one morning and we were pleasantly surprised.

WARNING: RANT STARTING– I was anxious to eat out this much in a week because 1. I was worried about finding vegan options and 2. that I wouldn’t be following HCLF no oil because restaurants put oil on everything. I was willing to handle that once a day because I was so excited for the experience of eating out and getting a break from cooking 6 nights a week. The first meal we had for lunch when we got here was at a restaurant close by and I had ahi tuna with a cabbage asian type salad.

When transitioning to vegan, we said we would still eat fish sometimes because we liked it the best, thought it was the best of the worst for us, and it made going out to eat easier because there was still options we could order without making it difficult. We ate a lot of fish in the first few months, and then I stopped really cooking it at home. If we went out to sushi or if we went out I would order it because it was available and I liked it. Then one day the taste of the fish on my sushi didn’t give me the same joy, it made me gag. I think my taste was changing to the point that any fleshy texture wasn’t doing it for me anymore so I haven’t been eating fish lately. I didn’t feel great about eating that tuna for lunch, and then I came home to read while laying out and read about fish in Starch Solution. Fish are being taken from the ocean faster than they can reproduce and we’re about to have a shortage on sea life. I’ve always been a big fan of the ocean, and don’t really want to do anything to mess it up if I don’t have to. I read that fish is filled with the contaminants that pollute the ocean like chemicals and plastic, and mercury is something you don’t want inside your body. Fish still has a significant amount of cholesterol so if you’re trying to get your cholesterol down without taking medication, fish won’t help. Also, the things they feed farm-raised fish are pretty nasty. The more I researched, the less I felt like I needed to eat fish. Do I like it? Yes. Do I need it to survive? No. Was it going to make me healthy? No. Josh still wants to eat it, and he can order it when we go out, he just knows that I don’t really want to partake in it now.

The rest of the week when we went out, I tried to find vegan options on the menu and it was challenging. I had to ask the waitress’s if they could make things vegan and they always had to go ask their chef then come back to me then ask their chef and come back to me. It was a hassle, and it was mildly embarrassing. There was butter in the bread, there was butter on the mushrooms and onions, there was chicken stock in the pasta salad, there was butter in the rice…etc. Pretty much butter in everything. For one dinner, edamame was the only vegan option on the menu, so I asked if they could make a veggie roll and they did, so that’s what I had for dinner. I got a vegetable sandwich for lunch on an Italian herb roll (only one without butter) without mushrooms and onions and it was great. For dinner last night we went out and I was going to get a Spanish rice bowl with veggies, easy enough right? No, butter in all of the rice options… they said I could have a salad or a bowl of veggies. Oh, just what I wanted with a margarita! We went back and forth until I asked if they could use the roasted veggies and make tacos with the corn tortillas on the menu. We finally came up with a solution, but it’s a process. I apologized for the inconvenience, and she said “oh no problem, we get asked all the time!” If they do, why isn’t there one vegan option on the menu? I felt frustrated because why aren’t there any options anywhere I go, and embarrassed because I feel like my Uncle Kirk trying to special order and cause a scene. It wasn’t enjoyable, and I’d rather just cook at home so I can avoid that situation. Could I have just said I’m fine with the butter in things? I could have, Josh is okay about dealing with that but I don’t want to. I don’t want to eat things that I normally don’t eat. I don’t want to eat dairy if I don’t eat dairy. I don’t want to pick meat out of baked beans to make it easier for someone else if it’s against what I eat.

I’ve been vegan for 8 months and the more research I do, the better I feel about my decision. The research I find pushes me to try harder and pushes me to do better than I currently am doing. The joy I’m getting now isn’t from a big steak or pizza, it’s from knowing that I’m doing everything I can do to put food in my body that will benefit instead of hurt me. That I’m not hurting any animals in the process, because once you see that process it’s heartbreaking and I really enjoy what I’m eating. Also, that I’m doing what I can to help the environment. I shouldn’t have to see people roll their eyes at me, tell me I’m crazy or I’ve gone too far, or react like I’m doing something negative to them. I’m only doing what I think is the best thing, it’s not like I’m joining a gang and getting neck tattoos. If they don’t want to hear what I’ve learned, then they don’t have to ask. Most people don’t want to hear that what they’re eating isn’t healthy or it’s hurting something else so they can keep eating what they want, so they don’t want me telling them when I’m only trying to help. If people want information from me about being vegan and it’s benefits, then I hope I can be a role model and example. If they want to make fun of me for it, then go ahead, look like an uneducated idiot. I’m over people judging me for something that I’ve become passionate about, and I enjoy.  It did make me more anxious to eat out on our upcoming vacations, but I guess I’ll just have to be the annoying one trying to find something at restaurants now, and I have to be okay with that. END RANT

Other than those feelings coming up that I’m glad I can get off my chest, it was a great trip. I’m glad I packed food and came prepared because it did help to be able to have choices to eat at home. Now Josh is telling me we have to start packing up and heading out, so unfortunately we have to go home. I could get used to blogging with this view though! Hope everyone is having a good week! 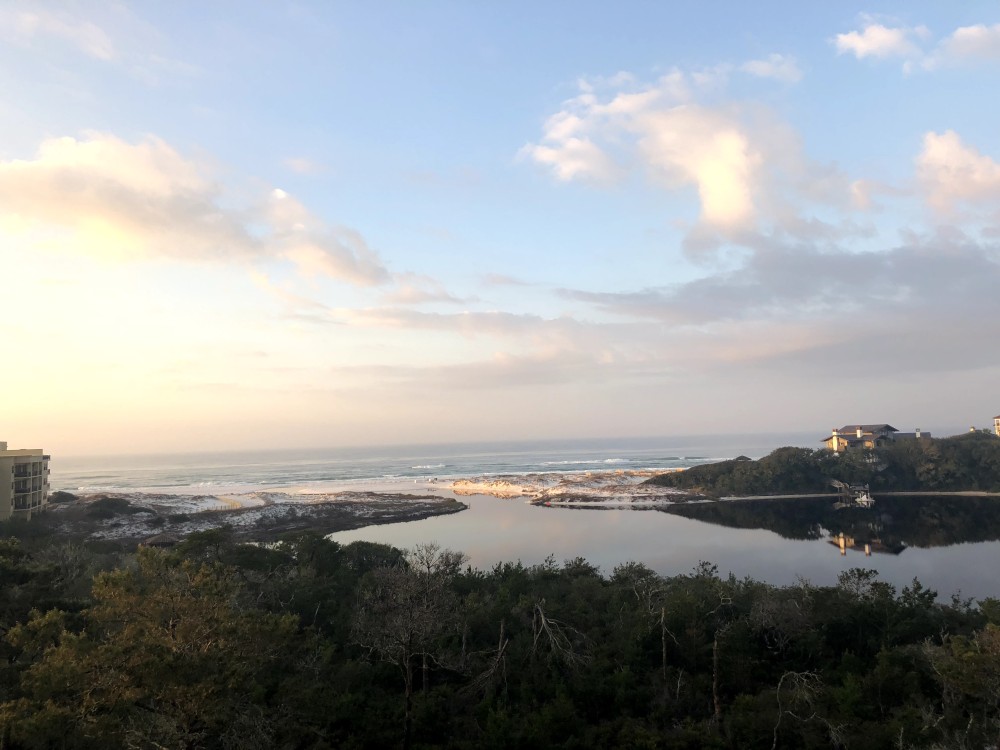